I couldn't sleep tonight so I thought I'd just poke around online for a while. It turned out to be impossible to miss the fact that the Google App Engine was released tonight. We knew about this a little while ago but now we know it's name.

The SDK itself is pretty cool. They've done a nice job bundling up all their services in nice little downloadable package except they left out the Python runtime (and are afflicted by the Windows Installer's lack of hyperlink control in their launch condition). In any case, it has been a quite a while since a new technology announcement really got me to kick back and think about how I personally could use it. I was starting to dig into Ruby a bit but maybe I will switch over to Python now. ASP.NET is beginning to drive me bonkers and The Django Book seems like a really nice read. 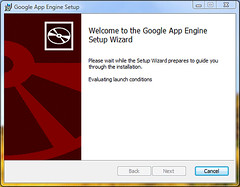 Anyway, after watching the launch videos I noticed that Bob had sent around an email saying thus, "The Google App Engine SDK for Windows is delivered as an MSI built with WiX (v3.0.3907, even) and Heat." I hadn't downloaded the package at that point but bounced on over, downloaded and kicked off the install.

Blam! Right out of the gate I knew I was looking at a package built by WiX. How? Look at the red. All the other installation vendors out there like blue. As Bob noted, it looks like Google even used the latest weekly release for WiX v3.

Now, unlike Google's previous attempt at using the WiX toolset, this looks like a pretty clean package. There is only one ICE message, a warning: C:\Users\robmen\Downloads\GoogleAppEngine.msi : warning SMOK1076 : ICE47: Feature 'ProductFeature' has 940 components. This could cause problems on Win9X systems. You should try to have fewer than 817 components per feature.

Win9X probably isn't something I'd worry about either although it does point to one of the troubles with creating one Component per Resource. There are also only two non-standard CustomActions that open the README.txt and launch the default browser. Both completely reasonable things to do (bonus points for using the default browser).

In the end, as I noted in the beginning, it looks like they've done a nice job bundling up all their services. I'll leave you with one observation that I found kinda' funny. There are 938 rows in the MsiFileHash table. There are an equal number of rows in the File table. That means there are no executable files in this package. Obsolete skills indeed.

WiX v3 releases back on track.