Turtles all the way down. 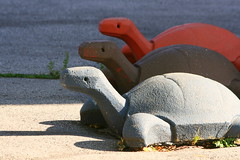 Shared stories are an important part of any culture. We have our fair share of long running stories and jokes amongst the core WiX developers. Most of these stories have some connection to typical geek culture. One of my favorite is the story about the nature of the universe and all things WiX.

I don't remember how the story originally came to be told but I specifically remember Reid telling it. Reid came to us via the ivy league university of the west cost, Stanford. He always seemed widely read and far more up to date on the current state of the world than the rest of us.

Anyway, as I noted before, I'm not sure what got Reid to relate this story but it probably had something to do with too much time in the guts of the recursive descent parser. It goes something like this:

A famous scientist was lecturing about the earth and sun and the universe. At the end of the lecture a little old lady at the back of the room stood up and said, "That's all very interesting but wrong. We all know the world is resting on the back of a turtle."

The scientist simply smiled at the old lady and asked, "Then what is the turtle standing on?"

"You're very clever, young man, very clever, " said the old lady waving her cane at him. "But we all know that the turtle is standing on the back of another turtle. It's turtles all the way down!"

"Turtles" or "turtles all the way down" became one of the favorite ways to finish a design discussion. It was especially awesome if you could finish someone else's conversation with "turtles all the way down". In recent years (since Reid, Derek, K and Robert have stopped showing up), the term has kind of fallen out of use. However, it'll pop up every once in a long while. Even now thinking back, I can't help but smile.

If you're interested in finding the original story, I think Reid said he read it in A Brief History of Time

tags: rob, mensching, wix, culture, turtles, all, the, way, down